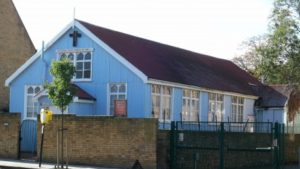 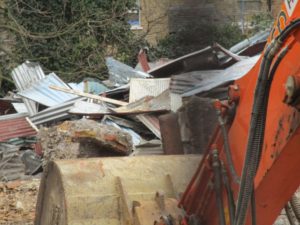 It was sad at the end of February 2021 to see the long-awaited demise of the Hetherington Road Bible Truth Church of God corrugated iron chapel. This type of pre-pack temporary structure was all the rage in the 1890s, when the Hetherington Road chapel dates from, although according to Wikipedia’s detailed article on Tin Tabernacles examples may date back further. As far as we know this Hetherington Road Chapel was the last remaining tin chapel in Lambeth.

In 2013 we highlighted the planning proposals to demolish the chapel and replace it with a block of flats and ground floor worship space. The 2013 website article is reproduced below and contains some other historical details.

Incidentally the church has a number of Youtube videos which give an indication of the interior and “churchmanship” at this long-cherished corrugated iron chapel. There is an abundance of pews, a crucifix on the wall and men officiating use stoles (ornamented scarf-like garment). Older women generally wear hats. But the emphasis is on preaching – so in a way it seems the services might be like St Pauls in Ferndale Road nearby. The difference was probably that for all the natural light in the Bible Truth tabernacle it was probably extremely difficult/costly to heat in winter. Let us hope the new building works out well for them.

It has to be said that the Bible Truth church maintained their building impeccably right up until the Covid lockdown – when presumably it made sense to start redevelopment whilst the chapel could not be used.

The Bible Truth Church of God have applied for planning permission to replace their current corrugated iron mission hall with a spanking new complex containing a purpose built worship space on the ground floor with 8 flats above.
The chapel was originally built by the Primitive Methodist denomination at least 112 years ago. The London Gazette of 21st June 1901 reported “NOTICE is hereby given, that a separate building named Emmanuel Chapel, situated at Kelloway-street, West Brixton, in the civil parish of Lambeth, in the county of London, in the registration district of Lambeth, being a building certified according to law as a place of meeting for religious worship, was on the 14th day’ of June, 1901, duly registered for solemnizing marriages therein, pursuant to the Act of 6th and 7th Wm. 4, c. 85.—Witness my hand this 17th day of June, 1901. EDWD. D. L. WILMOT, Superintendent Registrar.”
Kelloway Street was renamed as Hetherington Road around 1917. A prominent Primitive Methodist lay preacher called Thomas Hetherington had perished in a mining accident in 1898, and one wonders whether the naming of Hetherington Road might have been a gesture of respect for him.
The Methodists sold the building to the Bible Truth Church of God in 1962. On 13th September 1974 the South London Press covered a public enquiry at Lambeth Town Hall into Lambeth council’s proposed compulsory purchase order on the church. Mr Stephen Beaver of the Clapham Society spoke at the enquiry in the church’s defence. On 10th October 1975 the South London Press reported that Secretary of State for the Environment, Anthony Crosland had over-ruled Lambeth Council’s compulsory purchase order on the church.
The Brixton Society has submitted comments on the present development plans to the council. Along with some home-owners, this church congregation, which has been using the same premises for over 50 years, now has scope to upgrade their circumstances due to the current property boom in central London. One can hardly blame them now they have this opportunity, but it is sad that the only remaining “tin tabernacle” in Brixton may soon be just a memory.
In “A History of Brixton” Alan Piper writes: “As Brixton’s population increased rapidly during the 1870s some congregations – such as Railton Road Methodist Church – made use of pre-fabricated corrugated iron chapels until permanent buildings could be provided. The largest example was Torrey and Alexander’s temporary mission church on what became the site of Lambeth Town Hall. Just one of these “tin” chapels survives in religious use – in Hetherington Road, off Acre Lane.”

The new look church building, according to architects sketches: