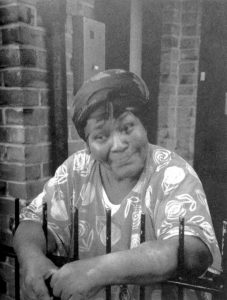 Brixton in the 1970s had a very different atmosphere to now. In one respect we were unique. 103 Railton Road was Pearl’s Shebeen – an unlicensed club for drinking and dancing patronised by Caribbean gay men. Other regulars came from the gay squats nearby in Railton Road and Mayall Road.

Pearl’s shebeen at 103 Railton Road was run by Pearl Alcock who after many career changes went on to be an artist after her shebeen was closed by the authorities. Her work is having a retrospective at the Whitworth Gallery (part of Manchester University). Pearl died in 2006, so sadly cannot appreciate this renewed interest.

Pearl Alcock is already mentioned on our website in the section on Local Heroes, which does mention the shebeen. This club was edgy and radical. The picture at the top of this article must have been when she was then living in St George’s Residences on the opposite side of Railton Road from where her club used to be, and was now pursuing her interest in art.

Below is a Lambeth Council picture taken after the 1981 Brixton riots, which has been marked up to show the location of Pearl’s shebeen at 103 Railton Road. Pearl’s Shebeen was closed by the police back in mid-1979 shortly after Mrs Thatcher’s came to power. Closing down illegal drinking venues was the start of what later became Operation Swamp 81, whereby people “hanging out” on Railton Road (then called “The Front Line”) and other sensitive spots were repeatedly stopped, searched and arrested. As we know from the Scarman Report this contributed to the subsequent riots.

103 Railton Road today looks a bit different as it has been converted to residential flats, in common with several properties in that parade.

A final twist to this saga of gay life in Railton Road pre-1980 comes with the joint Booker Prize winning novel Girl, Woman, Other by Bernardine Evaristo. I have not yet read the book,  but a friend assures me this in an exact quote: “woman-only bars were their hangouts; Fallen Angel, Rackets, the Bell, the Drill Hall Theatre bar on a Monday where the lesbianarati hung out, and Pearl’s shebeen in Brixton on a Friday night run by Pearl, a middle aged Jamaican woman who stripped her basement of furniture, set up a sound-system and charged at the door.”
Girl ,Woman,Other page 20

I am not qualified to say if Pearl did indeed run a “girl’s night”. I wonder if anyone reading this might know?

The celebration of Pearl’s work at the Whitworth Gallery, Oxford Road, Manchester 13 is on until 12 January 2020. For full details, visit their website, here.